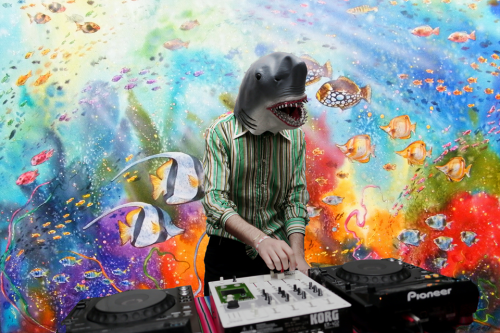 Hello, my name is Bojan Buntic. That’s me in the picture above, I am diving, fierce as a shark, for music in the depths of soundcloud. I am a DJ from Gothenburg. I love to collect obscure tracks, or never before heard stuff from music geeks on Soulseeks many rarity channels. I also happen to like to share what I find. Either blazing it out of the speakers of a club, or writing about it in the grip of a passion on the borderline of sanity.

I’ll be writing about what cool, funky, strange, brutally disorienting and banging tracks I’ve found on my adventures through the Swedish electronica underground. These are tracks and producers I cherish, every one of them burned on a CD likely to be dysfunctional from overheating the decks.

Beats like the hits and kicks upon a boxing bag of the worlds funkiest mixed martial arts-master. Dark, foreboding, and futuristic electronica from producer and DJ Tove Agelii from Christian Dinamarca and Ghazals newly started label Staycore. Oh, and she’s 17 (which I didn’t know when she dj:ed at one of our parties at 3 am).

I first heard this examplary specimen of acid improvisation on the Gothenburg based mix-podcast GBG WAX TRAX. The story behind the track is as simple as this: Cazuma and friends meet up once in a while and play around a little with machines. “Sandarna Acid” (I’d like to call it get together-techno) is named after the Gothenburg industrial area where it all happens, and is as spontaneous and wild as one of the many (illegal, or barely legal) parties held in the area.

This badass cowboy disco track sounds like the drunken dream of musical oasis in the mind of a DJ Harvey mix. Its lush shoegazy sound mixed with desert sand, and a little bit of sea air from the Gothenburg archipelago, create the perfect atmosphear for a horseback ride into the sunset. It’s the first release on Gothenburg-based label Westcoast Recordings, from which I look forward to hearing more amazing releases.

This track is an audio hallucination in the mind of a club kid stoner walking through the dark hallways of an abandoned venue after closing time, the illusion of a slowed down trip hoppy house track with internal voices morphing and duplicating like an image in a fun house mirror. Its ghostly paranoid sound is terrifying but addictive, and having gone through the strange maze of somnolent sounds you walk around feeling a bit numb, the world colder, until you hit it again.

Gothenburg is a town where club arrangers sometimes happen to also make great music. Sebastian Kapocs usually works at Yaki Da, or is responsible for dance floor havoc at some high end club, perhaps on the release party for a shoe, suit or a tie, or at our version of Berlin, Mythos. But sometimes he just happens to, like, do an absolutely epic remix of Rihannas megahit “Bitch Better Have My Money”.

Studio Barnhus boss Kornél Kovács usually puts out killer remixes of pop acts or house masters all around the world, but this time he’s the one being remixed. Claudio Solórzano, or Hwulu is a young producer from the Stockholm underground currently on rise in the music blogging world of Sweden. His remix of “So So Solid” is a hypnotic train ride through soundscapes like clouds.

Let’s talk about remixes. Let’s talk about the awesome Gothenburg based production duo About Girls, making some of the best and most innovative remixes in Sweden. Let’s talk about being dubbed up. This reconstruction of upcoming indiepop duo Heart/Dancer is one of their best, turning their track “Hallucination” into slow motion, shoegaze hiphop with the most crisp clear hihats heard in the West coast.

Hot minimalist electronic funk from the underbelly of Malmö. Fasaan record label board member Joel Nordström effectively accumulates precise, clean movements, small soundbites copulating with each other, until a minimal amount of force is needed for climax: easy-going funky as hell sex torture disco, that’s what I’d like to call it.

Tony Karlson – You Hurt More (This Is My Goodbye)

When he’s not dreaming of the future of clothing,  working on projects with Beatrice Eli or Zhala or other hype pop stars from Sweden, he’s making awesomely weird electronic music. “You Hurt More (This Is My Goodbye)” is a deranged sample of 80’s synth soundtrack music and a slightly unhinged simulation of the blackest noir soundscape from the era.

Nostromo – Microwave Cooking For One

Are you alone, floating in space, crying for the intimacy of the one you loved on earth, or just longing for that night long, long ago, when you danced and danced and danced, and then that one track you will never forget came on? Well, here’s what you need. Mattias El Mansouri has left a million monikers hidden in the depths of Soundcloud, but is finally ready to give the world of trance addicts what he’s been dreaming of. Inspired by the loneliest thing he’s ever seen, a cooking book for the heartbroken loner trying to get back on his feet, this is a track that makes tumblr girls cry digital tears of instagram longing.

I thank you for following along on this strange trip through what I think is the greatest music being made today. I hope you keep your eyes on the next part of this chronicle. I’m eager to show you the future.