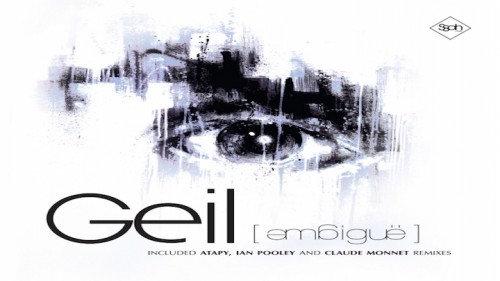 Frenchman and techno professional Geil, previously under the mantle Citizen Kain, kick-starts March 2015 with a fresh take on an old school beat with his new Release ‘Ambigue’. SSOH, with 58 releases now to their name, know their stuff, and the EP is completed with remixes from three well-oiled DJs.

The re-created tracks only seem to get better as they build. Beginning with a remix from Bedrock man Atapy, this dark, mysterious techno track is exciting and builds anticipation throughout, only needing Mulder and Scully to accompany it. With frosty, ghoul-like vocals, a slower tempo, and dark, chilling sound effects, this escorts an eerie feeling to the track. With only a beat and quirky ad-libs, this would be the perfect soundtrack to the crystal maze.

My favourite of the four is label boss Claude Monnet’s take on proceedings. It’s a more upbeat and deep house version of the track with a higher tempo and significant tune. Claude Monnet produces one for the club. Almost Edwardian, his use of percussion and woody beat throughout keeps you locked with the sporadic movement of electronic effects. A surprising track focusing on an unexpected bridge of spiraling sci- fi sounds and seductive French vocals, narrating the story throughout, bringing it back to earth.

A harder, tech beat for starters from Berlin Label boss man himself, Ian Pooley, soon breaks this into a thick trance of symphony, influencing a much more soulful and relaxed take on Ambigue. With a quick beat and gradual electric, twilight sounds, the French vocals make for a warmer track, perfect to listen to bring in the start of night.

Finishing with the original remix from the man Geil himself, this is a sexy, mid tempo house track with seductive French vocals and a placid collection of sounds. With characteristic grooves it reflects an intimate production. A surprising and totally unpredictable assortment of remixes. Each one creating a totally different atmosphere, and expressing an interesting showcase of production and talent.

Grab your promo already already out on Traxsource.