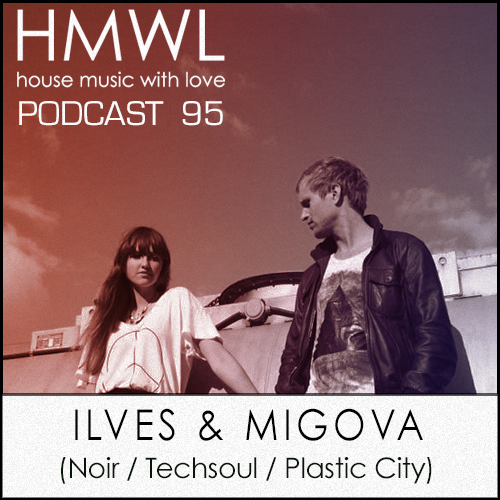 A Swedish producer and a Russian DJ both now living in Oslo spending most of their spare time in the studio creating some dreamy deep techno. It seems like a great combo, and it sounds great too. We made sure to get an exclusive podcast and an interview with Ilves & Migova just in time for their upcoming release on Techsoul records.

HMWL: You both been in the DJ-scene for quite many years (how many?) in Paris, Oslo and Stockholm. For many DJs it’s quite a hard step to go from DJing which is fun and quite easy into producing – where one has to invest a lot of willpower and countless hours in the studio. When did this shift from just DJing to producing occurred for you guys?

Migova: I started Djing in Paris 6 years ago and already from the first gig it felt so right. I love connecting to the crowd and being in the spotlight. For me Dj:ing is about putting both myself and the people on the floor into another world for some hours. We all need to escape reality sometimes. Producing on the other hand still is new to me and I’m learning every day.

Johan Ilves: For me it’s been quite a strange ride. I started Djing at underground parties in early 2000s and started creating beats a couple of years later. Released my first EP on vinyl in back in 2007 and had a great debut. 2007-2008 was good years with support from big names and I even had a beatport TOP 10. But at this time my life wasn’t very stable and I started question my music. So i went from a strong debut to quiting making music. Took me years before I found my way back and started producing again. Now i finally feel I can finish what I started and it’s fun making music again.

HMWL: What kind of musical background do you come from? What are the main artists, but also genres of inspiration for you?

Migova: As i know, I been listening to a music from the moment of conceiving till present. My parents had lots of vinyls, that they daily played at our house. So I grew up with a music surrounding me. I been into electronic music since I was 9-10 years old. For me it always been like “the music of the future”. One of my first idols was PPK – A Russian Trance duo, based primarily in my native city Rostov-on-Don. Later it was Pink Floyd, Moby, Depeche Mode, The Chemical Brothers and others who inspired me. My musical background is mainly singing. I been singing and writing songs since my childhood.

Johan: My inspiration comes from everything in my life that touch my soul. It can be atmospheric sci-fic movies, travelling, the weather, people, dreams, you name it. Club music can inspire, but I use it more as technical reference these days. I have no musical background, played to much nintendo as a kid, learned everything by myself and producer friends.

HMWL: Swedish producer and DJ scene. What’s going on? What’s new cool and hot? What’s getting old? Which labels and talents should one keep an eye on, according to your personal opinion?

Ilves & Migova: We have no clue what’s goin on in Sweden, and we still haven’t had any ”Ilves & Migova” gigs here. From 2014, we’r finally goin full time with music and all focus will be on improving in the studio. We are very positive about the future and finally having the time we need for our passion. What’s getting old? 80% of producers today tryin to sound like someonelse instead of discovering themselves.
Keep an eye on true artists like Vaal, Forrest, Mark E, Tale Of Us, Dexter Ford, Siopis, The Revenge, Minilogue, Stefan Z, Roman Fluegel to name a few. Right now we’r into…eh let’s call it “deep galactic disco” and moody techno.

HMWL: You’ve had released tracks on Noir Music, Global Underground and Plastic City. What label would be a dream home for your future tracks? Do you prefer you tracks to be pressed on vinyl as well as released digitally? Or does it make no difference to you?

Johan: I definitely want a new vinyl release but it seems harder to get ur music on vinyl releases these days. Regarding labels, I’m not very good at finding contacts and reaching out, it’s easier releasing for friends. Get Physical, Life & Death, Cocoon, Rebellion, any of those bigger respected labels would be nice for future releases.

Migova: I want to release on spanish label Suara. Cool beats and love their artwork with. They also have a project where they use some of their profit to save homeless cats. I love cats! *laugh*

HMWL: Finally what does the near future looks for Ilves & Migova? Projects, releases, festival gigs?

Ilves & Migova: The next Ilves & Migova EP is called ”Planetfall” and contains 3 more alternative and dark deep tunes we made last year. For the future months we will be working hard in the shadows. Got some intresting concepts in progress and this summer we hope to release some of our new work. Our focus right now is to improve the technical aspects and make more DJ-friendly tunes. To get bookings for the future we need to release stronger material and reach out to more people. We are more artists than djs and want to be booked for our music, we will never desperately send mixtapes or try to lick ass for gigs. Last years we both had dayjobs that sucked a lot of our time, and we stressed way to much in the studio. From now things will be different, we are in peace, and very ready to take on the world. Ilves & Migova 2.0