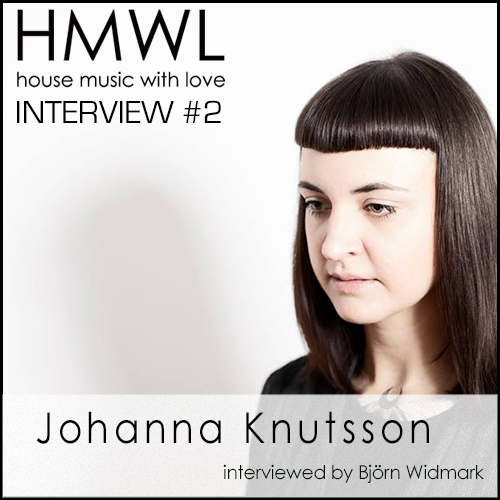 Berlin-based house and techno producer and former hair dresser Johanna Knutsson changed career after a Diplo concert. Now, seven years after she first started DJing, she has played in the biggest clubs in Berlin, she has a residency at the Stockholm club 235:1 and recently founded her own label together with Luca Lozano. HMWL met her before one of her sets in Stockholm.

How did you end up here.. originally?
Many years ago I used to work twelwe hours a day as a hair dresser and make up artist. And I had always wanted to do that. Then I went to a Diplo concert. I just danced and I didn’t talk to anyone the whole night. That´s when the thought of Berlin came to mind.

What happened?
I went to Berghain. That was when I understood that electronic music was like meditation for me. I also remember going to Panorama Bar and the whole dancefloor was moving as one person, and I felt the DJ was the puppet master. I wanted to be that puppet master. The first time i deejayed was in Malmö, on a afterwork. I puked of nervousness right before I went on but is was such a great experience. I wanted more, so moved to Berlin.

How and when did you start producing?
When I had been in Berlin for a year, and been playing in small places, my present manager found me. My managers’ husband told me I needed to start producing my own material to promote my name. I stayed with him in the studio for about a year, trying to learn as much as i could.

How did it go?
My first release, Heavy Baby on Klasse recordings, was well recieved, but wasn’t really ready for all the fuss. That, among other things, made me take a break from producing. A year later I finished my second record, but it didn’t get as much attention. It was different from the first one[…] and I think that’s why it got sort of forgotten.

Where did you go from there?
Then I met the best Hans Berg! And we have been making music ever since. We have the best collaboration, and I have sort of made a promise not to ever work alone again.

Can you tell me about your newly founded record label Zodiac 44?
We are going to release twelve records. Our first release, by Dungeon Acid, were sold out and the second one is in the press.

What is the idea behind the label?
I want to release my favorite artists edgiest and almost unplayable tracks. People have done me alot of favors thoughout the years, and I want to pay my dues somehow.

What about your future?
I have a secret booking coming up, that is waiting to be confirmed. I’m really looking forward to the summer festivals. It feels like a great year. Something happened this autumn. Now I don’t feel insecure any more, but now I know it’s going well!