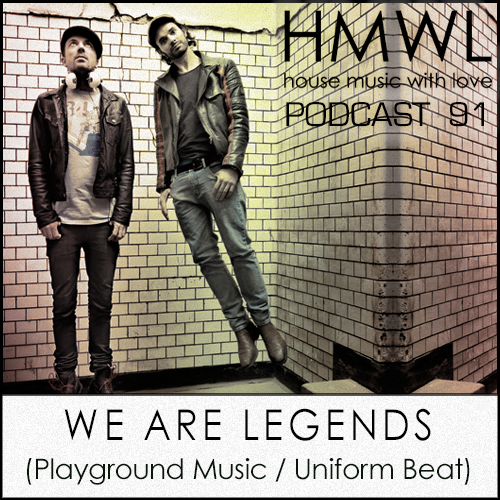 HMWL: Who are we are legends?
WAL: We Are Legends are Karl von Spreti & Tobias Leo, two friends that found each other late in life. We both needed to get our creativity out of our heads and in this case it ended up as music. Our sound is from the deepest of the deep to the happiest disco there is. Our process of making music is out of rules as long as we are having a blast doing it. Try to work with people that challenge us, both genre and work wise. Everything is released on Playground Music Scandinavia / Uniform Beat.

HMWL: What does your production set-up look like?
WAL: It´s almost all analog. A lot of stuff is used but mostly monopoly, ms-20, juno60, juno106, Arturia mini brute 909, 808 and 303 and of course the old Simmons. We try to bring as much of it with us live and like when our sets change sound from day to day. Logic and Ableton ion the computer.

HMWL. What to expect fro WAL the next 6 months?
WAL: We have a lot of fun stuff going on. We are waiting for Cece Peniston vocals for a project and have a lot of other in the pipeline.
About 4 releases before Christmas and a few remixes.
HMWL: In general, how do you think the electronic music will sound in 2014?
We are great fans of Disclosure and think their style of sound is great. We like the idea to take the electronic music further away from the decks. More live and more “real” instruments. Commercial wise we think that the brick wall and white noise will take a step back. Letting more pure elements show. We Are Legends rules has always been that if your body isn’t in motion after kick, hi-hat and bass, you can discard the track. Think that will show on the charts as well.