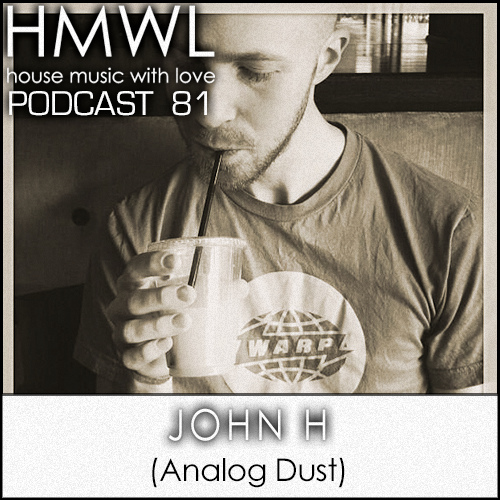 Podcast 81 comes from a Göteborg Acid and Deep house hero. John H has been releasing some wicked ACID tracks on Analoge Dust back in the day. Today he is preparing a bunch of new EPs with a more distinct Deep house touch. Tracklist and a short Q&A below.

HMWL: Who is John H and when did you get into the house sound?
John H: I’m a 28 year old DJ, electronic music enthusiast and all around nice guy from Gothenburg, Sweden. I think my first experience with deeper techno must have been in the late 90s when I heard stuff from labels like Basic Channel and Mille Plateux, I was only 13-14 years old back then, and generally kids my age had no idea music of this kind even existed, but I was taken under the wing of Swedish DJ and producer Anders Ilar, who tought how to spin vinyl and introduced me to a universe of good electronic music, with everything from harder techno and acid to experimental stuff, ambient etc. He was my mentor and teacher in those important early years and I’ll forever be thankful for this.

HMWL: You’ve also done some production work back in the days. What releases are to expect from you during the next 6 months
John H: First off I’ll have an older acid track I made back in 2005 released on a compilation from Rome based label Analog Dust, and I’m working hard to find suitable labels for never stuff. For me this year will be a lot about co-op with other artists. Me and my good friend Mathias Eriksson aka M.E.E.O just finished an EP of four acid influenced tracks, and at the moment we’re working on some more electro flavored stuff. I also have an oldschool acid project with Anders Ilar in the pipeline, I had just started recording acid lines for it when my 303 broke down, so I took the opportunity to send the machine down to Robin Whittle in Melbourne, Australia, for some service and Devil Fish modifications, as you understand I can’t wait to get it back! This project will be released under a secret alias tho, so I guess you’ll have to keep your ears and eyes out for it.

HMWL: The club scene in Göteborg where you are from. What’s going on? What’s hip, What’s underground? What’s overrated? Which clubs/event concepts are the one to check out while in town?
John H: The scene here is everchanging with new club nights popping up every month, and older ones closing down, right now there’s this big house/90s revival like everywhere else, so I guess that’s what’s up at the moment. Some of my favorite nights are Lokita/Ekolod at Jazzhuset and Musikinstitutet at Röda Sten, which always provide a good atmosphere and nice bookings, then there’s also the more underground clubs like Loftet and Klubb Cardboard at secret venues which doesn’t have to close at 3 like clubs in town, this is where the true heart and soul of Gothenburgs club scene is for me. During summer parties like this are usually held outside, often in a forest or near some lake or close by the sea, be sure to check those out, that’s my tip for anyone looking for a really nice party experience around here.