Now, let me bring you something really big and phat! Far Too Loud has been gushing out hard hitting EPs, like it’s christmas all year, since 2005. Their technique is to mix up hard breakbeat with phechedelic sounds, a most rewarding mixture. THey have come a long way since 2005, with major festival gigs and features in magazines like DJ Magazine and Mixmag, and music nominations on Beatport including worldwide touring. Damn! Well, I had the pleasure to have a electronic sit-down with one of the blokes, Oli. I also got hold of a massive non-stop-action mixtape. Nothing for the weak, no! 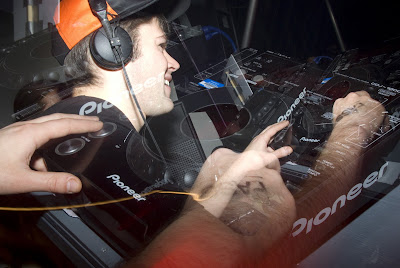 Lets’s start from the top. When and why did you start making music?

We have both had musical upbringings. I started playing saxophone when I was 10 and Dom played cello from an early age. We have both played drums too and so before we started writing dance music we both had a wealth of musical training. We met on the Tonmeister sound recording course at the University of Surrey and a shared interest in dance music led us to start producing tracks together. At that time breaks was growing fast and there were a lot of great tracks getting released which caught our ears so that is the route we went down.

Please guide us through the general process how you make a track?

It generally starts with a beat and bassline. Once these are sounding extremely fat we’ll start to play around with lead sounds and other ideas on top. As these develop the tune starts to take a structure and then its a case of working out the different sections of the tune. We try to make our tracks go on a journey so that they hold the listeners interest right the way through. The ideas need to keep coming and developing throughout the track to achieve this.
What synths, programs etc. do you use when making music?
Our main sequencer is Cubase 4, although we use Ableton Live when we do our live show. Pretty much all sound generation/processing is software-based, although we do have a few hardware synths which sometimes get used including Novation Nova & A-Station, Waldorf Pulse and Roland JV1080. We have recently acquired a Moog which I’m sure will get plenty of use! In terms of software we use Native Instruments Komplete collection extensively for synths and sampling and the Sonalksis Essential bundle for EQ and compression. The Audio Damage plug-ins are great for creative sound mangling.
Do you prefer to DJ or playing live at the club?
I think both have their merits and that it is best to be able to do both. Playing live is rewarding because it is all original material and we can have control over elements of the music that are pre-determined when just DJing tracks. The way tracks blend together is different when playing live. We can play bits of one track over another and really play about with the arrangement. DJing can be just as rewarding when you have spent a load of time finding tracks that really go well together and that you think will take the dancefloor on a journey.
You were nominated not only for the best breakbeat artist, but also for the best single in the beatport music awards. Congrats to that! (Sorry you didn’t win though, you should have). Did these nominations affect your sales and/or bookings?
I think the case is the opposite – that the nominations reflected how well our sales had been doing on Beatport. I think it is a great site and we have had a lot of exposure through them. We were definitely pleased to get the nominations for their awards, especially when you consider the big names we were up against!

Could you tell us about the experience of playing at a large festival such as Boom? 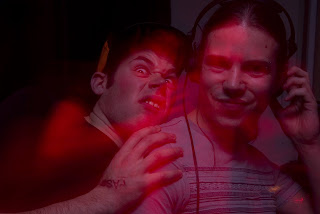 Boom is an amazing festival – it was great just to be there, let alone play there. We d ecided fairly early in the year to develop the live set for the summer festivals so that we could give something a bit more special to the larger crowds, something that would really suit the festival environment. We knew we’d be at festivals with a strong psychedelic tradition so included some more psychedelic influences in the set and it was really well received. We are still getting great feedback from the live sets we did at festivals in the summer.
Has there been some kind of funny or unusual happening during one of your gigs, that you could share? (Like a beautiful girl wanting to hear the latest pop hit at any cost, to the degree where she throw herself into the DJ-booth and eject the CD playing for 5000 people. Or the like..)
I remember one where there were a couple of dancers on stage. Half way through my set one of them appeared with an electric angle grinder and started grinding it against a metal pad strapped to her arm, causing sparks to fly 20 foot over the dancefloor. This didn’t last long as the club owner freaked out about health and safety regulations and put a stop to it. Nothing wrong with a bit of nightclub DIY I say.
How does the future look for Far Too Loud?
Strong I hope. We are certainly not short of ideas

for new music. Looking to early next year we will be releasing a second 3 part series on Funkatech, starting of with our brand new track All Is Machine and a remix from Specimen A, plus our own new label, Broken Robot. We will also be developing the live set to include more new material and starting work on an album.

And last but not least, what’s your top 5 tracks at the moment?
Feed Me – Mordez Moi – DnB hero of ours Spor under a different name. This track defines slamming! Still can’t get enough of it.
Daniele Papini – Church Of Nonsense – Really simple but really effective techno track.
Rex – Evil Buddha Comb – New track from master psy breaks producer Rex. This will be the first release on our new label Broken Robot.
Rogue Element – Hive – Great sounding, clever track from a great producer.
Digital Base – Superfashion (4KUBA remix) – Storming tune that shows breaks is still very much alive and kicking hard.
Thanks a lot, man!
Thank you!